Altai Argali is the crown jewel of Sheep Hunter’s trophy rooms around the globe. Altay Argali is the biggest wild sheep in the world and without doubt the most beautiful and impressive of all wild sheep. Shoulder height about 48 inches (122 cm), possibly more. Weight 400-450 pounds (181-204 kg), sometimes more.

The horns have rounded frontal edges, are heavily corrugated, and when fully developed will form more than a complete circle. The longest horns of record measured 71 3/4 inches (182.2 cm) (1973). Bases exceeding 22 inches (55.9 cm) have been recorded. Horns and skull, without the lower jaw, can weigh as much as 75 pounds (34 kg).

General colour in winter is light brown tinged with gray. Rump patch, belly, lower legs and face are white. Summer coat is much shorter and lighter, with the upper parts a uniformly speckled brown and white, and the rump patch only slightly lighter than the back. This subspecies does not grow a neck ruff.

It is the largest species of wild sheep. The North American bighorn sheep may approach comparable weights but is normally considerably outsized by the argali. Argali stand 85 to 135 cm (3 to 4 ft) high at the shoulder and measure 136 to 200 cm (4 to 7 ft) long from the head to the base of the tail. The female, or ewe is the smaller sex by a considerable margin, sometimes weighing less than half as much as the male, or ram.

The general coloration varies between each animal, from a light yellow to a reddish-brown to a dark grey-brown. Argali or nyan from the Himalayas are usually relatively dark, whereas those from Russian ranges are often relatively pale. In summertime, the coat is often lightly spotted with a salt-and-pepper pattern. The back is darker than the sides, which gradually lighten in color. The face, tail and the buttocks are yellowish-white. The male has a whitish neck ruff and a dorsal crest and is usually slightly darker in color than the female. Males have two large corkscrew horns, some measuring 190 cm (6.2 ft) in total length and weighing up to 23 kg (51 lb). Males use their horns for competing with one another. Females also carry horns, but they are much smaller, usually measuring less than 50 cm (20 in) in total length. 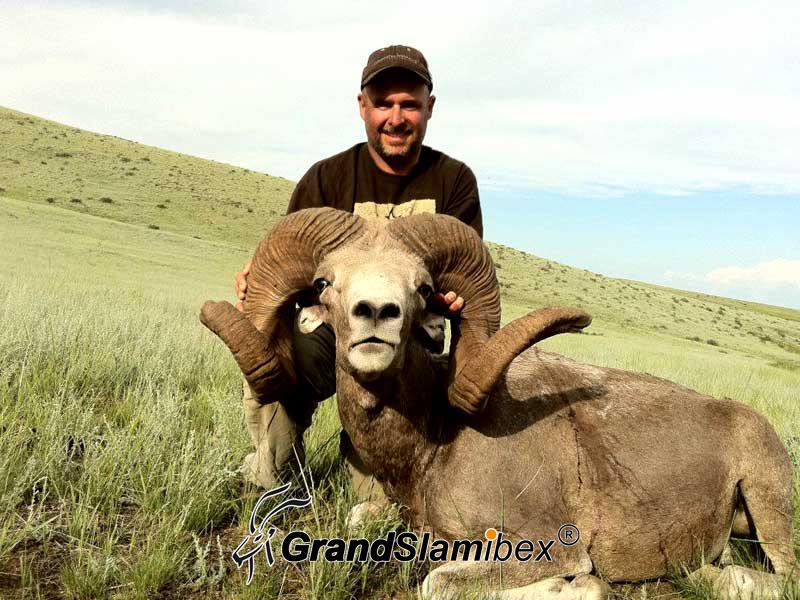